Did fintech fail?
After years of hype about how startups were going to disrupt traditional banks, much of the conversation has turned to how startups can help incumbents. Even those involved in the fintech boom are now stepping back and unpacking why startups haven’t made good on their promise to disrupt banks. Jake Fuentes, co-founder and CEO of budgeting app Level Money that was acquired by Capital One in 2015 and shut down just a few months ago, recently published his thoughts on how well fintech startups were doing on their disruption expectations. His grades: F in deposit and personal finance products, C in Lending, B- in payments, and B+ in asset management. Not a rosy picture, but the upside of exiting the hype bubble is that patient entrepreneurs and investors can focus on building more sustainable business models. Ultimately, this will benefit both the industry and consumers.

Blockchain and bitcoin primer
CB Insights has been on a roll in publishing in-depth research briefings and teardowns of the most important fintech trends. Last week, they released a great foundational piece on blockchain and common cryptocurrencies such as bitcoin and ethereum. The piece talks about some of the current hot topics such as technology challenges, risks, ICOs, etc., but the real strength is in laying out the philosophical underpinnings for how blockchain transactions work, why, and when they make sense. If nothing else, reading through this infographic will be a great start in understanding the steps in a bitcoin transaction. 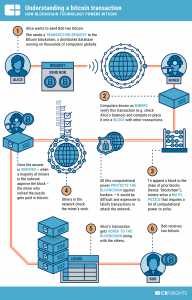 Coinbase’s Framework for Digital Assets
Before the “bitcoin $10,000” headlines were raging, the topic of conversation in the bitcoin community was the potential for another fork in the Bitcoin blockchain. Bitcoin had previously split into Bitcoin Cash just a few months ago, and the Bitcoin SegWit2x fork (Bitcoin2x) was supposed to take place earlier this month. Coinbase had gotten heat for not supporting Bitcoin Cash, and had decided to support Bitcoin2x. At nearly the last moment, support for Bitcoin2x dried up and the fork did not occur. In the meantime, Coinbase was developing their Digital Asset Framework to outline what factors they look at when supporting a new digital asset on their GDAX exchange. These guidelines may also be helpful to those of you looking at an ICO or alternative cryptocurrency that is not one of the main coins already in existence.